<< Back to Location Finder

DIRECTIONS: From US 19, turn east on 44. We’re located just a mile up the road on the right side.

This Location is Independently Owned and Operated Shop Owner Rick Campbell brings with him over 30 years’ experience in the auto industry. In fact, his family history in the automotive industry goes back to 1929. Wow! Although he is not a purebred Floridian, he has lived in Florida since 1990 after moving from Hagerstown, Maryland. A huge sports enthusiast, not only did Rick play college and professional baseball but he has also coached many teams. Baseball isn’t his only passion though, you can find him cheering for the Washington Redskins if he’s not spending time with his three kids and two grandchildren.

“Was told by my regular mechanic my truck (air condition problem) could take a couple of days to diagnose. Was fixed by you in several hours. Thanks.”

“Rick was really great. I hop you keep him around for awhile.”

“Great manager! I think his name is Rick or Richard – you’re lucky to have him.”

“Thanks for the quick but thorough work. We enjoy our new AC very much.”

“Love that you offer car credit plan as an option. I was only able to get the repair done because of that.”

“You have great mechanics at my location. They fix things right the first time and are great guys.”

“Management and crew adapted quickly when I changed from a Dodge to an import. I am so glad we found a capable and honest mechanic.”

“I just have a comment! It’s hard to find honest people. Here in Crystal River they are! It’s been a while since I’ve had trust for a mechanic – not anymore! Thanks guys!”

“No improvement necessary – management + service was excellent. I will return and told friends already.”

Our 15th Year! Free Oil Change for Toys to Support the Marine’s Toys for Tots

Ice Cold Air Discount Auto Repair is giving away a free oil-change including a tire rotation to any customer who brings in a new, unwrapped toy for the Marines’ “Toys for Tots” program from now until December 12th. This is the Pinellas-based auto repair franchise’s 15th year giving away oil changes to those who donate toys. Customers have the option of trading the new toy for an oil change and tire rotation on the spot or exchanging the toy for a voucher for a free future oil change and tire rotation or $20 off any service. There are 17 Ice Cold Air locations throughout Hillsborough, Pinellas, Pasco, Hernando and Citrus counties. “We are very proud to join the Marines and their exceptional program for our 15th year. It is an honor to help facilitate our customer’s support and making positive impacts in the lives of children in our community,” said Tina M. Denham, President of Ice Cold Air Discount Auto Repair. “Our customers and community have been very good to us for 50 years, and acting as a drop off location for Toys for Tots is an excellent way for us to give back to the community and our customers for their support.” Over the years, it is estimated that Ice Cold Air Discount Auto Repair customers have donated 25,000 toys. This year Denham says they aspire to donate over 2000 more, “our loyal customers have a proven history, and I know they are eager to support the program again this year. We are asking for even more community members to take advantage of this offer and help us meet our goal.” The toys should be of similar value, in the original packaging and unwrapped. Donations will be accepted at almost all of the 17 Ice Cold Air locations. Those interested in taking advantage of the promotion should call or stop by their local Ice Cold Air location to ensure participation. Visit www.icecoldair.com for a list of locations. # # # 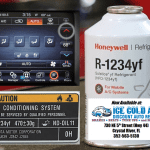 We are thrilled to announce we can now service newer vehicles that utilize HFO-1234yf refrigerants. This product is becoming more popular and can be found in many new vehicles starting as early as 2014 models. As of 2018, 50% of new vehicles from “original equipment manufacturers” (OEMs) are estimated to use HFO-1234yf.
We are the AC Experts in the Crystal River and we have the equipment to service these vehicles! PLUS, in most cases, we can SAVE YOU hundreds of dollars on recharging your system over the dealership. Call us to find out just how much money we can save you! 352-563-5130.
HFO-1234yf is the first in a new class of refrigerants with a global warming potential rating 335 times less than R-134a and an atmospheric lifetime of about 400 times shorter. HFO-1234yf has a global warming potential of less than 1, compared to 1,430 for R-134a. Carbon dioxide’s global warming potential is exactly 1. This colorless gas is being used as a replacement for R-134a as a refrigerant in newer model automobile air conditioners. Wow are we excited! Ice Cold Air Discount Auto Repair was presented a 2014 Best of the Bay Award from Creative Loafing.

We were awarded their Critics’ Pick as the “Best Honest Mechanics in a Dishonest World!” Plus, we are featured in their Best of the Bay issue that hits the stands today! (on page 78)

Thank you to Creative Loafing for recognizing how hard all of us work to make our wonderful reputation stronger every day, and thank you for telling all of your readers throughout the greater Tampa Bay area too.

We would like to convey our heartfelt congratulations to each and every shop, and each and every employee who share in this tremendous acknowledgment. It is a true testament to how far we have come together as a team to make our Ice Cold Air family stronger and our company thrive in the spotlight of greatness.